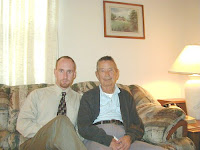 Today is my birthday and I am turning 44. That is hard for me to read and even more difficult for me to willingly type out but it is true... If my grandfather, Papa Wooten/AKA Andy Sr. were still alive he would have turned 101 years old today as well. Not a day goes by that I don't think of him or miss him. He passed away on February 5th, 2005 and It amazes me that seven years have actually passed. It was always the neatest thing to have the same birthday and from when I was a kid all the way into adulthood it was just such a cool thing to share.

In my whole life I never felt safer, more loved or more accepted than when I would be with Papa. Some of the best days of my childhood were spent alone with him. One in particular day stands out, when I was three or four, Papa and I were on the swing on his front porch, and he taught me the song about the “Animal Fair.” It’s a song that I was happy to teach to my daughter when she was a toddler.

Papa set a very high standard as someone leading by example in my life. Papa was always well groomed, well dressed and well mannered. He kept his home clean (I know that he cleaned at least once a week because I got to help in that a lot myself), and if you went hungry at Papa’s it would be your own fault. Not only did he cook lots of food he was pretty darn good at it too. From Papa I learned how to make fried chicken gravy.

What I do not remember is Papa ever getting cross with me. Even though I am sure, there were many occasions I deserved it. I also do not remember Papa ever saying a bad word towards anyone even if he had just cause. From him I learned good temperament, but I admit I have yet to master it.

Papa was always extremely generous to everyone and especially anyone in need. I know that he helped many people in many different ways, being sly as he was; it was difficult to figure out what he was doing or when he was doing it, but you could see at times he was doing “something.” From Papa I learned always offer to help, or just step in and do it if you can.

I remember that every time I went to Papa’s house, I never knocked on the door or rang a doorbell; I could always just walk right in. Whenever he realized I was there he always yelled "Heyyyyyy!" and would give me a hug. From him I learned how to love and not to be afraid to show someone how much.

I would not be where I am today without Papa’s guidance and support. Though it has been nearly 25 years since I left home, his words and final advice given one Sunday morning at breakfast still ring true for me. On the verge of leaving home and going into the Air Force, I was naturally scared. Mostly I was just worried about how life would turn out in general. I am sure I had asked Papa what he thought I should do and or could do with or about my future. The words he told me I refer to daily. Papa simply told me “always do your best, if you do that, things will always be ok.” There were many life discussions between us at the table in Minden, WV just about every Sunday morning in my late teens and I was blessed to have had Papa not only for great advice but sometimes just to listen without judgment. From Papa I learned that sometimes all you really need to do for someone is just be there and really listen.

I probably would not have finished college if it were not for Papa as well. He was not 100% happy about me going into the service but I promised him that I would go to school either during or after my enlistment and get my degree. That promise was very important to me to keep and I did.

All I have are good memories of Papa, and it is very difficult to accept the loss of someone whom meant so much to you. All I can say is that Papa was probably the "best person" that I have really ever known and the other person in this entire world that is even in same league as him actually has the same exact initials that he does... and that would be Annie.
Posted by Andy at 12:08 PM