I am definitely feeling better today.  I can tell because I woke up early on my own before the alarm.  Overall even with being sort of sick it has been a good week.  Riding on the track stand again, getting some small runs in and doing some short weight workouts all have me feeling like I am going in the right direction again.

Yesterday evening I rode the bike to Manitou so that I could go and do the Incline.  I tried to keep my heart rate between 130 and 140 BPM.  More importantly I was tying to find out what that range actually felt like relative to the level of effort pedaling.  Anyway the ride to Manitou was fun even if it was a touch chilly.

The incline was okay.  The full moon made the trip more interesting but I had to stand on the brakes a bit to prevent myself from overtaxing my lungs.  Made it to the top in 42 minutes which I feel is about right all things considered.

The run down Barr Trail was awesome and for the first time in a long time I felt like I was actually having a good run which was a treat.  About a mile and half from the depot I ran into a older guy going down the trail in the dark who was completely without a light.  Even with the moon the trail was not that illuminated and I could tell as I pulled up beside him that he was not having fun.  I gave him my backup handheld led light from my pack to use.  He asked how he could get it back to me and I told him that I would be at Kinfolks for a bit and that he could stop in and drop it off.

Of course I am a cynic and I don't have much faith in humans typically so I didn't really count on seeing my light again and if I didn't no big deal.  But I'll be damned if he didn't eventually show up and return the light to me.  Pretty cool!

Annie texted me the coolest saying last night.  I am not sure of the original source but she sent, "Don't let anyone tell you that you are too young to accomplish anything, a baby shark is still a fucking shark."

That text really made me smile! 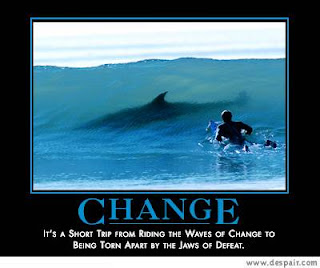