Define irony.  When a team that is having a winning season mostly due to their new quarterback is defeated by the team that they got their new quarterback from.  Of course I am referring to the loss that the Denver Broncos and  Peyton Manning were handed yesterday by the Indianapolis Colts. Maybe Tim Tebow can get his old job back?  Okay, I completely exhausted all of my knowledge of the NFL in this paragraph.  Neither team is special to me for various reasons.  I do remember when the Colts snuck out of Baltimore in the middle of the night and the drama that came after.  But seriously, I bet Melissa and Annie watch more football in a weekend, or two, than I have the last ten years combined.  Maybe even longer.

Dogs have been causing some interesting drama for me the past two days.  One is mine and the other is not.  First, the dog that is mine.

Part of what threw me off on the second half of my run yesterday was when I came home I discovered that Asia had indeed been busy entertaining herself in the most unproductive manner.  Pulled out and chewed on were one pair of Italian heels... not mine.  In the kitchen I also discovered the loaf of bread that was on the counter was missing.  Knowing where to look I went out to the back patio and found the empty bag along with a mess of other stuff that she had dragged outside, which wasn't her's to play with.  So I had to clean up that mess before taking off.  She earned kennel time for that trick.  Anyway, I think it just sort of got under my skin and threw me off a little.

This morning I took a break to make some breakfast and while in the kitchen I saw a flash of movement in the backyard through the half closed blinds.  A quick peek and I recognized the dog as one of the ones in the neighborhood that I watch.  She had escaped her pen and her backyard and found her way to mine.  I quickly got my shoes on, grabbed a leash and my neighbor's keys and took her home, just thankful that she came to my house and that she was safe.  Anyway, when I got back home I remembered I had left a roll that I was going to toast with my eggs on the counter when everything went down. Of course Asia being as opportunistic as she is, the roll was long gone by the time I got back.  This one was on me.

Taking a rest day today.  Tomorrow is supposed to be five miles and I am thinking of heading over to the CC track bright and early to do a MAF Test to see where I am.  I haven't really done one since I started training at MAF exclusively several weeks ago.   The last one I sorta did was that weekend in July or August when I was too burned out to travel anywhere and decided to stay home.  I really don't expect the results to vary too much from what my fitness level was last spring or summer to be honest but it's a useful way to get the miles in.

Back to back twenty milers slated for later in the week.  I am going to do them Thursday and Friday since I don't have class on Thursday night this week.  I should be able to knock them out easy enough.

I emailed my Hoka rep about this pack.   I'd be interested in giving it a shot.  I really like the Nathan Packs I use but would like something with just a tad more space in it. Hopefully I can score one.  Maybe in time for the JFK 50 even.  That would be cool. 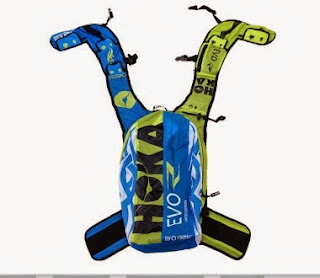