A mixed bag kind of weekend... 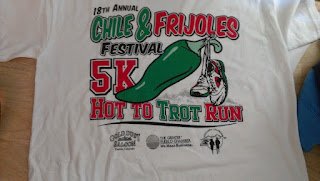 I will call the weekend a draw... Melissa and I went out and  had a blast at dinner and being out Friday night.  Unfortunately that was her last night home for a couple of weeks but we did make the  best of it.

The rest of Saturday was spent just taking care of things around the house and running errands after Melissa left.  I stayed in and didn't go out or anything because I wanted to take it easy and rest/relax before the 5K in Pueblo Sunday morning.

Sunday I drove to Pueblo butt-ugly early, to be there for the 8:00 a.m. start of the Hot to Trot 5K.  I wanted to run this race for a few reasons, but mostly just to see where my speed was and to gauge what I might expect going into the Fall Series races which start next weekend.  I didn't believe that I did all that well to be honest and I left right after the race to get home to take care of Asia but later in the afternoon I discovered that I finished 10th overall and 2nd in my age group.  My time was 20:51.  About two minutes off from my PR.  I will say that I wasn't as fast as I wanted to be but I did run about the speed that I thought I would so that is good I guess.  Next Sunday will not be easy I know but I will do my best.

The rest of Sunday was spent hanging out... I went for a late lunch at Rudy's BBQ and then for a quick ride on the MC up the pass to WP and back down.  I almost decided to drive up the Pikes Peak Highway but decided not to as I didn't have a heavy enough jacket on.  I was only wearing a hoodie and my leather jacket was home.  Started watching The Debt on Sunday evening but could not get into it at all.

Running this week... not sure what I will do exactly.  I will keep riding the bike on the track stand everyday like I have been to keep the time volume up but I think that I will keep all of my runs under eight miles or so.  Tuesday will be a track day as usual.  He hasn't said anything but I don't  think JT will be there as he is off gallivanting in the deserts of the great south west.  (Congrats JT)

I am going up to Fort Collins on Wednesday to see Annie.  I am really excited about that trip.  I will go up after work and we will have dinner together.  I will get to see her again when she comes down this weekend too so I am doubly excited.

Lastly... tomorrow makes four weeks since Asia had her ACL surgery.  Tomorrow she will not  be as confined to her crate as she has been and can start resuming normal activity.  I will try to take her for a walk but only a short one and by short maybe to the corner and back.  Hopefully in another four weeks she will be back 100% or at least damned close...