Save Money - Make Your Own Fuel

We are between "tasks" on our Aspen Rec Center contract today and I don't have any clients scheduled so... I have the afternoon off! Taking the time to pack and get things ready for Run Rabbit Run 100 this weekend.

To get ready, one of the things I need or needed to do was to make a couple batches of "fuel" for the race.

Over the years I have used many different products. Pepetuem and Heed from Hammer, Carbo-Pro, and even some custom-made-to-order stuff that was okay. Personally they all work for me... well, except for Heed but that's another discussion. What DOESN'T work for me is the damned price of it all.

So over time, since 2012, I have been working on and making my own fuel. Originally it was plain Carbo-Pro mixed with diluted liquid Gatorade of either orange or lemon-lime flavor. Then I started mixing the Carbo-Pro with powdered Gatorade (again orange or lemon-lime flavor) in varying ratios. Then thanks to Lucho, I bought a 50 lb bag of Maltodextrin from Amazon.com which I have been using forever now.

The last change to the formula happened last summer when I quit purchasing MAP by the bottle and started mixing FundAminos into the concoction. I made that switch only because this way I don't have to carry and take 5 MAP every hour. Not to mention that fishing out 5 MAP every hour and taking them while on the bike can be a challenge. Instead it is just part of the mixture now and in the end Fundaminos are cheaper than MAP too.

This stuff works and is dirt cheap and I figure it costs me pennies to the dollar in overall cost compared to what I used to spend. And remember... this mixture got me through two series of Leadman - not mention all of my races this year. Well, except for that damned Power of Four 50K but that day I just wanted to eat normal stuff, and that was only thing that made that day endurable... ;)

The Fundaminos I add 1.5 scoops of that to every six scoops of scoop of maltodextrin to four scoops of Gatorade.

I just keep adding more to that ratio and mix it as I go with a fork. In the end the color in the tub should be fairly consistent. 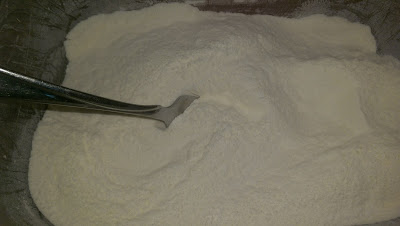 Then I just do the same process again but this time using orange flavored Gatorade in a separate tub. 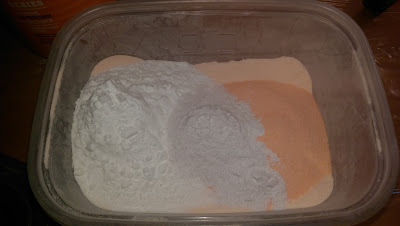 When it comes to race time... or any training run exceeding two hours I do the following... I drink 1.5 scoops mixed with water per hour and have one gel per hour. My personal preference in gels for the past two years has just been orange and chocolate Gu. If I were really industrious (read less lazy) I'd use my maltodextrin and make my own gels but even my frugality has its limits. As for preference of Gel, these are what I like and works for me... your tastes and preferences might be different. And THATS okay... :)

I drink approximately one bottle per hour with one and half scoops of my mix added to that. What I really do is every 15 minutes I take 2.5 sips out of my left handheld, and then 2.5 sips out of my right handheld to keep things even. Every hour on the top of the hour I have one gel. That gets me about 280 calories per hour, every hour. And like I mentioned, every long training run or race over two hours this is exactly what I do. Period.

This is actually something that I have wanted to write about for some time... With what everything costs nowadays... anywhere savings can be found is good. Because after all, the more money you save the more race entries you can pay for or buy more shoes, right?

P.S. As a side note, I do usually have other things on the course like this weekend I will have other treats packed in my drop bags. But those are treats and things to look forward to if I start to struggle. I do not rely on them for fueling or count them as a part of the plan. Sometimes I have extra things but most times I don't.