Things are definitely clicking and moving in the right direction it seems.  Still feeling tired, and OLD this week but hoping to move out of it sooner rather than later.  Was able to pull an hour on the track stand today and of course it is Tuesday so that means to the track I go.

And of course after the track I went and gorged on sushi with Melissa at Fujiyama.  I think that Tuesday's are the best night to go there, later, after all of the riff-raff is gone because the fish and everything is so much more fresh for some reason.

Had a long heart to heart with Dr. Lisa yesterday and we are going to be in lockstep next summer training and racing together like this past year but more so with a loftier and more a grandiose goal structure.  Should be a blast.  More about this in the future, but except for a few details, 2013 is sort of a done deal already.

Going to look at the Superfly on Thursday with Larry at lunchtime.   Unless he waves me off on it I intend to pull the trigger and buy it.  Melissa asked me tonight, "If you get this bike you ARE going to guard it with your life, right?"  I told her of course and I wasn't even going to leave it in the garage it would be kept in the house.  She asked me where and I asked her if she had ever seen THIS photo... 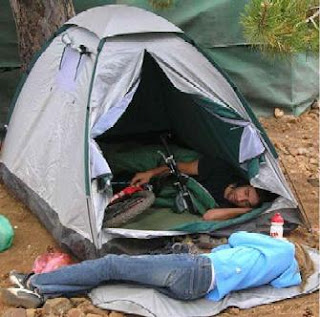 Apparently our senses of humor weren't as in sync as usual when I told her about it as I was the only one laughing.

FS II is Sunday... I hope to have a better showing than FS I for certain.  I think that of all of the Fall Series races, II is the easiest in a way.  You don't have the stupid creek to worry about, and it isn't as long as FS III or FS IV... but it is very hilly and there is that goofy rope climb towards the end.  It also just seems that this one just goes better for me than the others.  I hope that is true because I could use a shot of confidence right now.  Last weeks 7th overall and 1st 40+ really doesn't count.

Finally... I am reading The Secret Race after reading about on GZ's Blog.  All I can say at this point is damn!!!  I have never been a fan of LA but this book makes me even less of one.  So far it is an awesome read and I am learning more about bicycle racing and pharmacology than I ever hoped to.  I will write more about it once I finish the book and at the rate I am reading it won't take long.

N. Cheyenne Canyon/Columbine Trail tomorrow night if anyone is interested.