I will just be blunt and say that this year's Rocky Raccoon 100 proved to be biggest ass kicking that I have EVER taken in my entire life. It seems ridiculous even to me but that is the honest truth. I went down there and my head and my ass were BOTH served up to me on platter. Incredible.

In "theory" the experience was supposed to go down like this... Train in Colorado, go to sea level, run in some warmer temps in the sunshine and enjoy a break from the winter weather. Take advantage of the "fast and flat" course and lower altitude and get some new PR's. Finally to finish with a time that would potentially indicate a sub 25 hour Leadville 100 finish this coming August... in theory...

One of my FAVORITE quotes of all times from Tom Clancy but I don't know the exact source of it goes like this, "Those whom the gods would destroy they first make proud." Well, I don't think that I went down there with a big head but I will admit to being completely humbled throughout the experience which I guess we all really do need from time to time as well.

Now, the "reality." It rained... to the tune of 2.5 inches on Saturday. I saw more of my shadow at night from moonlight than I did during the day. There was a ton of mud. The course as far as I am concerned isn't that flat. The first couple of loops were really hard to maintain a pace on and I wasn't even going that fast but it was stressful on me. I could not breathe at all. And in the end it pretty much took everything to walk in a finish the last 20 miles. Hell it wasn't until, way into the 2nd loop, close to mile 40 that I was able to actually envision finishing. (I am going to have to write an entirely separate entry on that subject alone... mentally my game was NOT there at all for a lot of reasons as well that need to be looked at. No excuses just things that did come into play and did not work my favor.)

I think the best way to explain the race from here on out is just doing it by loops...

Miles 0 - 20 Loop 1: Right at the start, and I mean right at the start as we were all standing in the torrential downpour of rain there was a loud roll of thunder just as we started. It seemed rather portentous to me as to how the day was going to go. It was raining hard but the trail did not seem too torn up with the mud but we would discover that part where it was really bad about mile 4-5 into the loop. A 100 yard mud bog that only seemed to get worse through the entire race. I made Damnation aid station a little slower than I wanted to be but overall in good shape. I suffered through the rest of the loop back to the start and my split was about right. The only problem is that I was running very slow but it was taking a lot of effort. Even at this point I knew that I was in trouble maybe.

Miles 20-40 Loop 2: Fresh shoes and socks at Dogwood were nice and a huge morale booster. Out for the second loop. Still not feeling great. Still can not breathe. Hit the mud bog again and try to go around it to keep feet relatively dry but only partially succeeded. The rain had stopped for a bit but started again around ten on the second loop and was heavy going across the exposed top of the dam. I wasn't having fun and although I didn't quit, it was during the loop that I considered dropping the most and if the weather had deteriorated even more I just might had. However somewhere in this loop I did get the notion that I could finish so I promised myself that I would keep motoring.

Miles 40-60 Loop 3: Funny enough of all of the loops around that godforsaken, alligator infested swamp of a lake, this was my best loop around. Mentally I felt the best and physically I felt great too. The rain had stopped but my god ,there was mud everywhere. The sun was shining and it was nice knowing that I was going to be 2/3rd's of the way done really soon. My feet were starting to hurt from being wet all of the time as I only got about four miles though each loop with dry feet. Of all of the laps this was probably the best.

Miles 60-80 Loop 4: Now is when the carnage begins. Amy went out with me on this lap and we did well for the most part... no, she did GREAT, I was sucking wind. My feet REALLY began to hurt as well as my ankles and the lower fronts of my shins. In regards to my shins the constant reoccurring thought that I kept having was "spiral fracture" due to the stress on those sections of my legs. It truly felt like my shins had been twisted around almost. Painful. Amy kept me moving but I was not running nearly as much as I would have liked. It just wasn't there. If you know Amy and are EVER at a party with her and you want a good laugh, have her imitate Andy Running... Andy Walking and Andy Having a Gel. Trust me you will DIE laughing. She was wonderful and I am grateful that I got to hang out with a new friend and get to know her more.

Miles 80-100 Loop 5: The death march. Everyone had cautioned about getting stuck between laps 3 and 4 but for me it was between lap 4 and 5 that killed me. I came into the aid station at mile 80 at the same time I would have preferred and somewhat planned to be finishing. Regardless I was NOT going to quit at 80. I could not run anymore, period. The blisters were too bad, and my legs just would not "fire." Melissa left with me and I figured that she would have just done the first 3 or so with me then came back but no... she was dead determined to gut out the full 20 miles with me. And she did. Melissa has always been an awesome asset always crewing me in these races but she has never been on the course and seen the damage first hand out there... the zombies, or the "dead and dying" as I like to call them. In this instance though I was one of the "dead and dying" myself.

The last 20 miles sucked more than anything that I have ever experienced or at least remember. But we had a blast out there and though the last lap took me longer than the first 50 miles did I would not trade it for the world. Melissa got to see up close and personal the strain and she even got to feel it herself, even to the pressure of the final cut off. But we laughed and laughed and laughed so much that a couple of times she would be sitting in the road because she was laughing so hard. I told her that finishing it together the way that we did was just such a great testament to the quality of our relationship because out there we had to help each other. We laughed and we made the most of it. But it is a shared experience that can never be taken away and that, in and of itself made every painful aching step worth it.

The reality did not play out as hoped. Shit happens. In the end there were so many more positive take-aways from this race and lessons learned that it was all worth it. I didn't get the time that I wanted or have the race of my life that I wanted but that is okay as well. I know that I still have the potential and the capacity to do WAY better in a 100 miler and I still plan to do just that. It just won't be in Texas, trust me on that one! 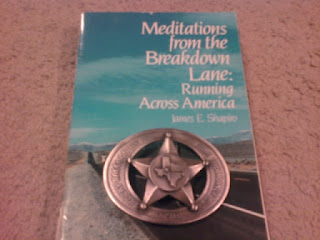