Sitting in the hotel lobby waiting for transpo to the airport.... what a week it has been.  I have to say that hands down this was the best vacation ever.  I've been to Cozumel before and to various places in Mexico lots of other times but this trip trumps them all.  The weather, the resort, the food, all the stuff that Melissa and I got to do... it was definitely a great week.

I managed to get in 70 miles running down here this past week too.  Kicked my ass it did.  I didn't get to run on as many softer surfaces as I would have liked so there was a lot of running on pavement.  Wind was always a factor as well.  Either inbound or outbound there would always be a  strong headwind one way or the other to buck.  But it was actually better running into the wind as it caused an evaporative/cooling effect.  Running with the wind to your back was at least ten degrees warmer it seemed.

About mile fifteen of yesterday's twenty mile run I started hearing a strange squishing noise.  Then I realized what it was.  I had completely soaked through my socks and shoes.  Water was dripping down the sides of the shoes... I was actually leaving footprints on the asphalt.  That is is how much fluid I had been losing.   I also drank about 100oz during that entire run too.  Maybe even a touch more.  It has been a great contrast to running in the crappy Colorado winter weather (which I hear we are still getting) but I don't know if I would ever be able to adapt to this kind of heat to train in on a regular basis.

The hotel we are staying at hosts a Triathalon every year... I would not be able to do it this year but I am not opposed to coming back and doing it again next year.  Maybe, we will see.  We are coming back as I definitely want to do more spearfishing and I want to see more of the other side of the island and there is so much more diving for Melissa to do.  And we HAVE to do the Pirate Ship Dinner again...

But I am ready to go home too.  I miss Asia and just being home.  We have six weeks until the Leadville Marathon and then the fun really starts for the summer.

I need to download my other pics but here is the one from spearfishing on Monday.  The guy in the camo wetsuit is Anibal the guide.  He was a pro divemaster for  ten years before becoming a spearfishing guide a year ago. 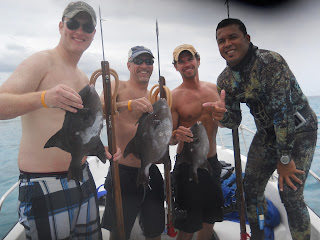