CC track this morning with JT. 5x1000m with 400m RBI. The CC track is getting to be a huge mess with goose shit on the north turn and then dirt and holes on the track from construction on the south turn. It was cold for the first day of spring with the wind coming straight out of the north.

The workout went fine... so was last night's run with Asia up on Section 16. I think that after Rocky Raccoon, I am FINALLY back to normal! Just under seven weeks which seem to be about right looking back at my recovery after the 2010 LT100.

It is hard to explain but running back across the bridge to the house this morning for the first time in ages I felt pretty good and like things were finally clicking again on all levels... physical, mental, emotional and even spiritual. Maybe I should have been expecting it given that I was not sore at all after the 5K on Saturday and surprisingly not too trashed after Sunday's long run to Cripple Creek. I will have a better idea by the end of the week but for now I will enjoy at least the feeling that I have finally bounced back.

I am enjoying the new NB Minimus MT00's more so than I ever enjoyed the Minimus MT10's. I was concerned about the 0mm drop in the beginning but it does not seem to be that much of an issue. The shoe is crazy light too... I weighed it at 3.6 oz. What I like best is that my feet feel more protected in these than in the previous model. Sure some rocks and stuff poke through but it just doesn't seem to happen as often as it did in the MT10's.

Also, I am giving the MT110's another go... I wore them on Sunday's run to Cripple Creek and they did great. My only complaint about that shoe right now and it does concern me a bit considering some of the races this summer is that my feet get really cold in them at times. Other than that they seem to be holding up okay. So I am not ready to throw them out just yet... 37.23 miles no blisters or any other problems... they have to be good for 50 miles then I'd guess. 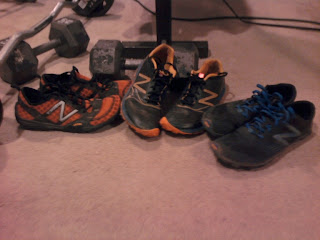 From left to right, the original Minimus Trail MT10's, the latest MT110's (which replaced the MT101's) are in the center and new Minimus MT00's are on the right.
Posted by Andy at 6:27 AM