The Cat Is Out Of The Bag 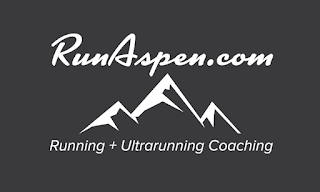 What the heck HAS Andy been up to since Leadville... after all, he has been kind of quiet...

Sit back and I will share with you the full story...

Much of what happens in my life is a nifty combination of both accident and design and I do not think that my newest direction in life is any different.

For most of my life I have worked with other runners as much as I can to help. After all, that is what this blog was initially about, sharing what I mostly learn the hard way, etc.

And just about every year or so I "adopt" a project runner and help him or her reach his or her goals in the sport of running. It's been fun and it's been a neat side-gig of sorts... heck, I've been flown first class to run marathons with people I have worked with and even put up in some fancy lodging for the weekend on top of that.

Anyway, this summer I found myself in a situation where I was balancing four such athletes, coaching them nearly daily. One runner - I had been working with her since the beginning of the year to run her first trail marathon this past August.

Maybe what sort of pushed me over the edge was being a guide at the Leadville 100 Training Camp this summer. Even though I have to admit it really didn't register with me at the time, it was truly a demarcation point that marked the beginning of me moving in a different and unexpected direction.

At any rate, move fast forward to just after this year's Leadville 100 and in my post race ennui - and contemplating the big "What's next?" question... it all sort of came to me...

Now... now it is time for me to step up and to begin coaching runners professionally. I have trained under the best, Weber and Lucho, and along the way even have developed my own best practices the past two years being self-coached 100%. My skills and knowledge are there otherwise how could the runners that I have been working with be doing so well, right?

So the big question then became do I really want to do it? Do I want to take this on as a new job, a new business? My number one fear if I had one was this, I did not want to end up like the guy who loves fishing so much that he buys a bait and tackle shop, only to discover that he never gets to go fishing anymore... I love running so my challenge was to figure out and convince myself that I can run both businesses (well) and still run for myself. I can. I know I can, and that is what I am going to do.

But I bounced the idea off of many of those I consider "close" to me who I knew could and would be objective about the idea. Or be realistic at least... and to a one, everyone was over the moon supportive. However, what pushed me over the edge was a completely out of the blue email that I received in early October from one of the training camp attendees who had finished the Leadville 100 and wrote to thank me for all the help I had given him before the race.

I took that as a sign, fully committed and have been moving forward on the project ever since.

RunAspen.Com is formally an LLC in the state of Colorado and that was my first step, actually creating a living and breathing legal business entity.

Next came the website and digital footprint design of it all and the website is up and I posted my FIRST article there today geared towards people running in Aspen during the wintertime. But there will also be a ton of Leadville specific articles as I add more content through the following months.

So there you have it... at least the broad strokes... Happy to say though that today, looking at the website traffic... things are very promising.

As for me... personally... things are good. Not much running lately due to a cold and a slight hamstring pull.... we started snow making last week (nearly three weeks late) and that will be a solid push until year-end I believe. And then, well, all of the work on RunAspen.com. - I think that catches you up to now.

Happy Thanksgiving Everyone!
Posted by Andy at 3:57 PM