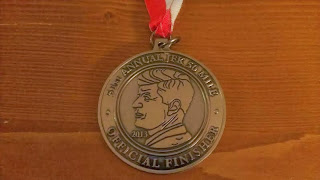 Yesterday's JFK 50 didn't go exactly as I planned or had hoped.  But it was at least consistent with the rest of my running this fall which means it was ultimately inconsistent.  In a nutshell I had a great run until mile 30.  About mile 34 through mile 38 I hit that often encountered low spot which happens in most ultra's.  I just could not pull myself out of it so I did the best I could until things finally turned about mile 45.  I finished in 9:52:58 which isn't what I wanted but still a new 50 mile PR.

The course... the first 2.5 miles are on hard road going east from Boonsboro, Md to the top of South Mountain where it hooks up with the Appalachian trail.  That 13.5 mile section of the A-Trail is really one of my favorite running trails and I always try to run at least once when I come out to Maryland to visit.  The trail is not technical but it definitely tricky with many rocks jutting out of the trail and many roots which require constant attention to footing.  Getting to the towpath by the Potomac River is a relief allowing the mind and eyes a break.  I felt really good through this section and was enjoying the trail as always.

Next is the C&O Canal towpath.  25 miles of it!  Nothing hard here except it is a grind and after awhile the river and trees are no longer visually stimulating.  At all.  I hung in here okay for maybe ten miles then it just got old.  At mile 34 I thought I was at 37 and realizing that mistake sort of let the air of my ambitions.  By mile 38 I was really in the hurt locker.  Not wanting to drop but definitely not wanting it to go on anymore and surely just wanting it all to be over.  At this point I was no longer invested in the outcome and only wanted to finish.

Finally at mile 42 the course leaves the C&O Canal towpath and joins the hardtop road with a pretty serious and abrupt climb.  The last seven miles are typical rolling Maryland farmland two lane roads.  Before I rallied towards the end I was walking the ups and running the flats and downs.   Around mile 45 things turned around and I had a really nice run to the finish.

We really got lucky during the race as the winds which were in the forecast never really materialized until about the last mile and even then we were not running into it for that long.

I finished feeling okay and I was met at the finish line by my parents and of of my best friends Hugh and his wife Angie. Our other friend Bruce was busy working at one of the aid stations that day.   After the race we went to dinner and had a really great time.

The race... I was AMAZED!  Over 1000 runners were in it which is pretty big for an ultra, right?  I have to say that I have never seen a race managed as well as this one, EVER!  There were at least ten very well stocked aid stations along the course.   Course volunteers just looking out for runners on the A-Trail as well as on the C&O Towpath.  Every major road crossing has either local, county or State law enforcement directing traffic and looking out for the runners.  They even went as far as supplying reflective vests (which we had to give back) at mile 42 to all runners who went through there after 15:00.  That's foresight!

I think that every race director out there could learn a lot about how this race is managed from an ultra standpoint.  It was an eye opening experience.

The JFK is America's oldest ultra and this was the 51st running.  I don't know if I will ever run it again but I highly recommended that it should be experienced at least once.  I met a guy who is friends with my family this weekend and was going for his 37th finish this year.  37th!  Now that's something.

Now I am taking a long and overdue break with nothing structured or planned until I figure out the next year which might not be until the end of February.    It was a real challenge this fall having the JFK 50 still on the radar after Leadman but I am still glad that I did it.  But yeah.... now it is time for a break. I can't wait to do some ( a lot) of back country skiing in Aspen in December and more time on the bike when I can fit it in.
Posted by Andy at 3:49 PM